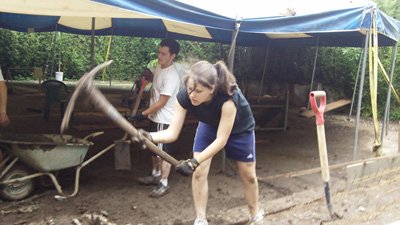 I’m not even sure which update this is.  Sorry for the delay, but we
have been running like crazy.  On Sunday we went to the Salvation Army
and did some skits for the homeless.  Our skits really did a great job
of explaining how sin holds us in bondage.  Devin opened the time in
prayer, Anna read a small Bible passage to the homeless, and all of us
were in the skits.  Afterward, I got the opportunity to share my
testimony with the crowd while an interpreter translated.  We heard
some amazing stories.  We spoke with a guy who was covered in stab
wounds. I had the opportunity to speak with and pray with a man who
has been clean from crystal meth and living for the Lord for several
months.  He lost his job, money, and marriage years ago because of
this addiction, but God has been working to reconcile those
relationships and give him peace about his situation.

Later in the day we went into down town San Jose, and handed out
verses to random passers by.  It opened up opportunities for many of
us to talk to these strangers.  People are so open.  Many people let
us give candy to their children.  Can you imagine someone letting a
stranger give their kids candy in America????  Devin gave an older man
a tract and the guy didn’t have much to say.  A few minutes later he
came running down the street after Devin and asked him if he could
read the whole chapter that the verse came from.  He poured over the
chapter with a lot of enthusiasm and attention.  Devin was really
touched by this.

On Monday we spent the entire time here at the mission base doing
projects for the organization are staying with. they are laying a lot
of concrete out here and we pitched in on this all day.  They have an
area about a third the size of our dining hall at teen quest that was
a big gaping hole we needed to fill with dirt.  While we were filling
it with wheel barrow after wheel barrow of dirt, we had to pull roots
out of the dirt to make sure they wouldn’t cause problems with the
concrete later on.  There is also a large area outside that we were
digging up to build an outside area for seating for praise and worship
events.  Lots of concrete was poured yesterday and a lot got
accomplished.  Our team of teenagers did and amazing job.

Keep praying for us.  Even though Anna is 14 and this her first time
out fo the country, she has absolutely shined this entire trip.  She
DID NOT stop yesterday and we just ran from 9 – 530 with this heavy
project (except for lunch).  Devin impressed everyone, even the other
teams with his work ethic, and Sam pushed through feeling very sick
all day with a great attitude.

We are off to do some more projects.  thanks for all your prayers.,
We may get another update out, or we may not be able to get you guys
another update until we send our newsletter out in early July.  We
love you all.

Travis Rusko / About Author
Travis Rusko is a youth speaker and author. He currently lives in Somerset, Pennsylvania with his wife Brittany.
More posts by Travis Rusko

With everything bombarding kids’ ears and eyes it’s no wonder they haven’t a clue how to strive for purity. But there are a few things we can say to show them why it matters.

On Sunday morning January 3, 2010  Jason Witt and Travis Rusko will be ordained as Teen Quest missionaries at the…

Things need to change from the inside out and from the outside in!

Travis Rusko gives a mission trip update from the field…

Our eyes are the gateway to impure thoughts!

As another dynamic year comes to a close we want to write to you with very thankful hearts. Knowing people are reading our letters and remaining engaged in our lives is such a blessing. We also want to give God the praise He deserves for those that support us financially and prayerfully. God has been so good to us this year. Here are some of the highlights.

Travis gives an update from the field

This site uses Akismet to reduce spam. Learn how your comment data is processed.